The Piece Hall Big Sing project is one of the shortlisted entrants for the Excellence in Primary/Early Years Award at the Music Teacher Awards for Excellence 2019. Frances Jones finds out more.

On a Friday afternoon in May, just before schools finished for half-term, the Piece Hall in Halifax was alive with the sound of children singing at the tops of their voices. This was not just one class of children, but 850 primary school pupils from schools in and around Halifax who filled the great space of the Piece Hall with songs that they had helped to write. This project, the Piece Hall Big Sing, was a collaboration between schools, the local music service, a historic location, and self-described ‘community musician’

Sam Dunkley. It seems to be emblematic of the sort of joined-up thinking that is so valuable in music education.

Dunkley is the director of Performing Arts etc, an enterprise based in Yorkshire promoting creativity and the arts. He has become experienced in directing this kind of large-scale performance, doing them ‘fairly regularly – maybe one or two a year’. In the past, the Piece Hall Big Sing had been a regular event, taking place every four years, involving children from Sunday schools in the Halifax area. Looking to resurrect this tradition, staff from the Piece Hall linked with the local music service, Calderdale Music Trust, which then got in touch with Performing Arts etc. It was Dunkley who was tasked with the job of running and directing the Big Sing performance, in conjunction with these two establishments.

In total, over 850 Key Stage 2 children from 21 schools took part in the project. Nine schools were involved in the composing process, with the children writing the songs that were eventually learned and performed by all 21 schools to an audience of over 2,000 in the unique surroundings of the Piece Hall. The performance took place on the last day before the May half-term on a big stage that was also being used to run a series of concerts – a significant part of the thrill of performance and, one could argue, a necessary piece of equipment if the job was to be done properly. This was the sort of working together that seemed to represent the whole collaborative nature of the project.

I ask Dunkley how the project worked. He explains that he spent three sessions working with each of the nine schools involved in writing the songs, which included a CPD session for the teachers. Prior to this, staff from the Piece Hall had visited the schools to set the scene and explain some of the local stories to be used as a basis for the children's songs. Having chosen the topics, the children then started to write lyrics and create melodies with Dunkley's help. Once the songs were composed and transcribed, Dunkley created backing tracks to enable the children to rehearse for the performance. On the day, the children performed their songs accompanied by a live band. 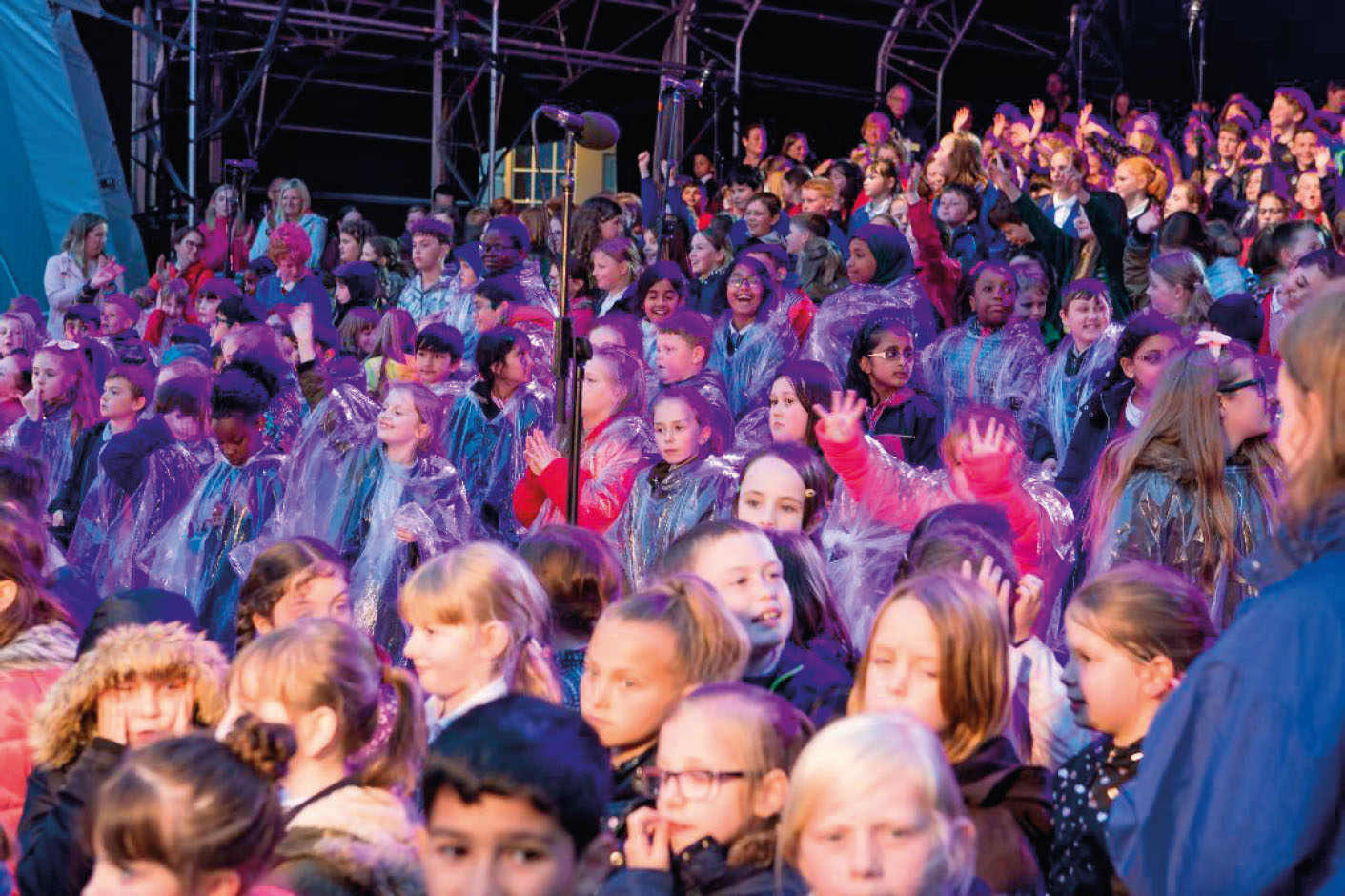 All of the songs were written with student input

At the Piece Hall, it was the first time in recent decades that a performance on this scale had been staged. Between the Hall, the music service, the schools and Dunkley himself, there were a lot of organisations with which to liaise. With such a large number of people involved, there is always the potential for logistical problems. When I ask him about this, Dunkley was upbeat:

The whole event was about the performers learning about, singing about, and singing to their community

‘Everyone in the project wanted the kids to succeed.’ The importance of this sentiment will be understood by any teacher who has ever had responsibility for a school production or concert. If the process is meticulously planned there is less room for error, but having everyone on board helps as well.

I'm curious to find out what Dunkley thinks the main purpose of a project like this is. Large-scale singing events certainly look good, but I wanted to press him as to the impact on the children taking part. ‘It's about community,’ he says. He explains that the songs were rooted in the community – the event was staged in a historic local venue, staff from the community did the initial workshops in schools, and the teachers were actively involved in the process through a CPD session. In short, the whole event was about the performers learning about, singing about, and singing to their community. Dunkley also spoke of the importance of ensuring high standards in an event like this, paying attention to the quality of the sound the children produced. The project combined many strands of the National Curriculum in its exploration of history, literacy and music, not to mention teamwork, creativity and performance discipline. But the chance to sing in a large chorus, to tell stories through music to a large audience is particularly special and was, Sam feels, ‘transformative’.

The tales that formed the basis of the songs are rooted in local history. They are stories about local people and places, such as the long-disestablished Halifax Zoo and a local daredevil called Blondin. The latter's tale was woven into a particularly catchy song and Dunkley is quite firm about the impact of children composing their own songs to sing. Asked about selecting repertoire for young voices, he tells me that there are often challenges on the ‘singability’ of the repertoire, and the suitability of the lyrics: ‘When children write songs themselves, they are “singable” and understandable.’ By writing songs with the children, Dunkley and the team also avoided the pitfall of selecting pop songs that are chosen for their popularity but which often sit in an range inappropriate for young voices. 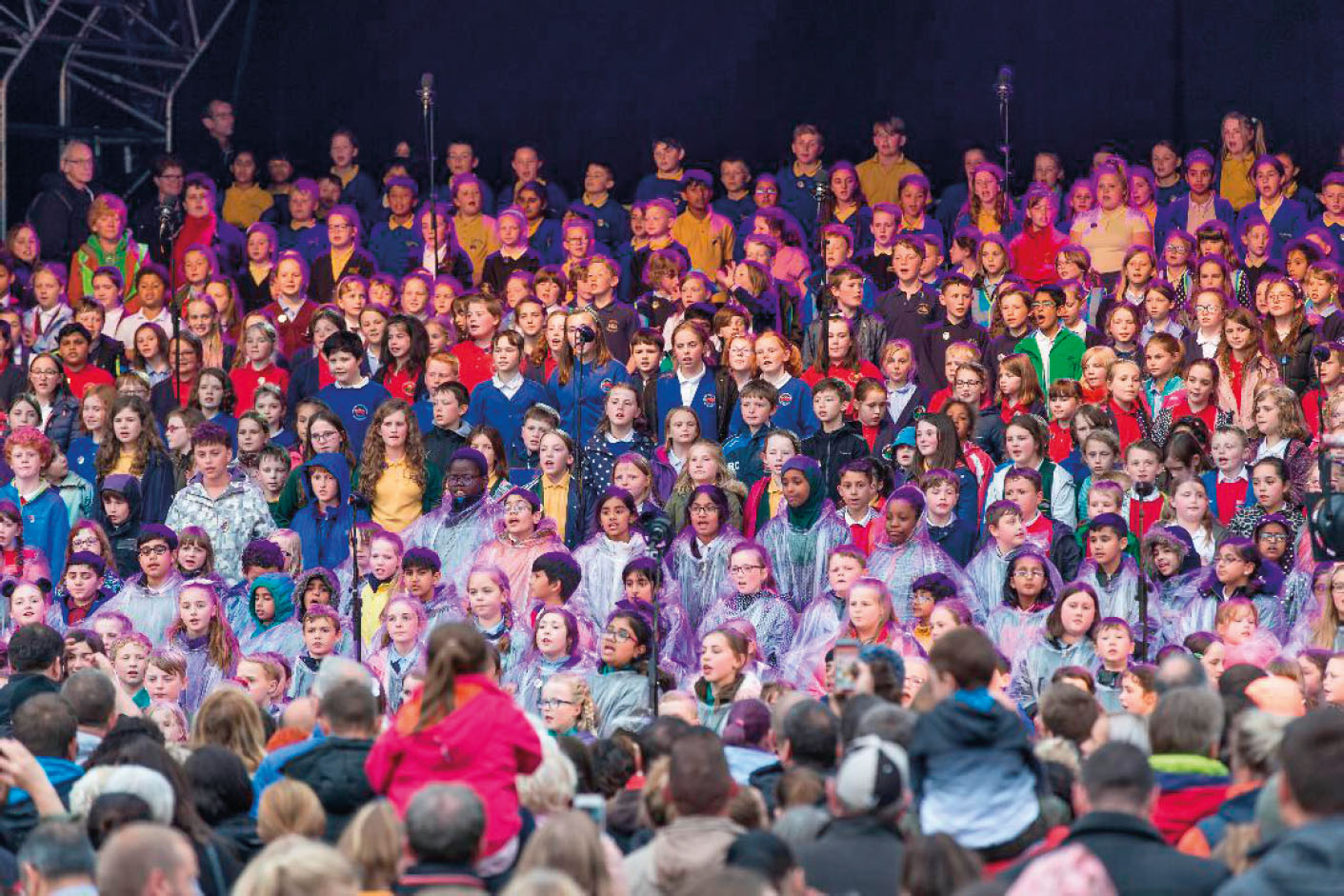 The project's success saw it nominated for a Music Teacher award

I wondered how the pupils responded to having to create their own songs to perform, whether they were nervous or just took it in their stride. Dunkley told me about a particular group of boys who he felt had gained ownership of the music through their songwriting group.

“A child's creation, be it the smallest tune, story or chant, belongs to them and the sense of ownership cannot be underestimated”

He described the boys as having ‘been on a journey’ and I know what he means. A child's creation, be it the smallest tune, story or chant, belongs to them and the sense of ownership cannot be underestimated. Work together and the feeling of achievement can be much bigger. Having had their work learned and performed by 21 different schools, you can imagine the confidence that might grow in these pupils.

Music in school is often assessed in terms of its value-added, its effect on pupils’ schoolwork, their confidence and motivation, in a bid to justify its place in the curriculum. The pupils taking part in this project had the chance to be part of a big musical event, one which certainly wasn't a regular occurrence in their school career. I asked Dunkley about the impact of the project on these children: ‘The outcomes are on many levels. This had a transformative effect, being part of something that was massive, part of something historic. Hopefully we will repeat the project.’ Schools were positive in their feedback after the project, with many saying they would be using the songs in school in the future. Some cited anecdotes of the positive impact it had had on individual children. Memories from this project will stay with the pupils and while these are always the least measurable outcomes, they are no less significant. I asked Dunkley about what happens when the project is over and the songs are just a memory. ‘My aim is that I make myself redundant,’ he says, suggesting a hope that teachers feel empowered enough to give the project a wider reach than just the allocated class in each school, and it hints again at the importance Dunkley places on music being rooted in the community.

And what of the Piece Hall, the backdrop to this event and the centre of so much local history? The Hall runs its own sessions for school groups that often include traditional songs based around the themes of the wool trade. Following the resurrection of the Big Sing, it plans to use the songs created by Dunkley and the children in its education workshops, thereby ensuring that local history, in the words of local people, is passed down to future generations of local schoolchildren.

After the success of the Big Sing in Halifax, it is on to the next thing for Dunkley. He has another exciting project in the pipeline, this time in North Yorkshire, the plans for which involve lots of performers, lots of music and lots of creativity.