Tapping into the next generation: BBC Young Musician 2020

After a year-long postponement and a spectacular grand final, BBC Young Musician 2020 was awarded to marimba-led percussionist Fang Zhang. Hattie Fisk speaks to him and finalists Annemarie Federle and Ewan Millar about the competition

‘If you really like something, keep on with it’, says a jovial Fang Zhang – winner of BBC Young Musician 2020 and a young percussionist renowned for practising until the early hours of the morning. He adds: ‘Dedication is the most important thing in a musician, but that is also applicable to anything in life.’ Born in China's Henan province, Zhang is a recent student of Chetham's School of Music in Manchester and is speaking to me from China via Zoom with the assistance of an interpreter.

Celebrating spectacular young musicians from across the country, the biennial televised BBC Young Musician competition more often than not sees performers on the piano, cello or violin awarded the title. However, in a year like no other, it is fitting that the BBC Young Musician 2020 should be won by an irregular choice – a marimba player. Fang Zhang is the second percussionist to ever win the competition; the first being Adrian Spillett in 1998.

Zhang's winning performance in the final, which is available to watch on the BBC website until April 2022, was extremely emotive. He was commended for his musicality and his performative nature, as well as his technical flair. He won over the judges with his contemporary marimba repertoire, including Prism Rhapsody by Japanese composer and marimba innovator Keiko Abe. On winning the award, Zhang told the BBC: ‘I am honoured and delighted to win BBC Young Musician 2020 and feel so lucky considering the talent of the other finalists.’ Chair of the competition jury and chief executive of Saffron Hill, Angela Dixon, said that the finalist's performances showed ‘exceptional musicianship’. She commented: ‘Fang chose to perform on a single instrument, the marimba, but elicited a kaleidoscope of colours and expression from it that deeply moved the jury and presenters. It was a privilege to be one of the few people to hear his performance live.’ 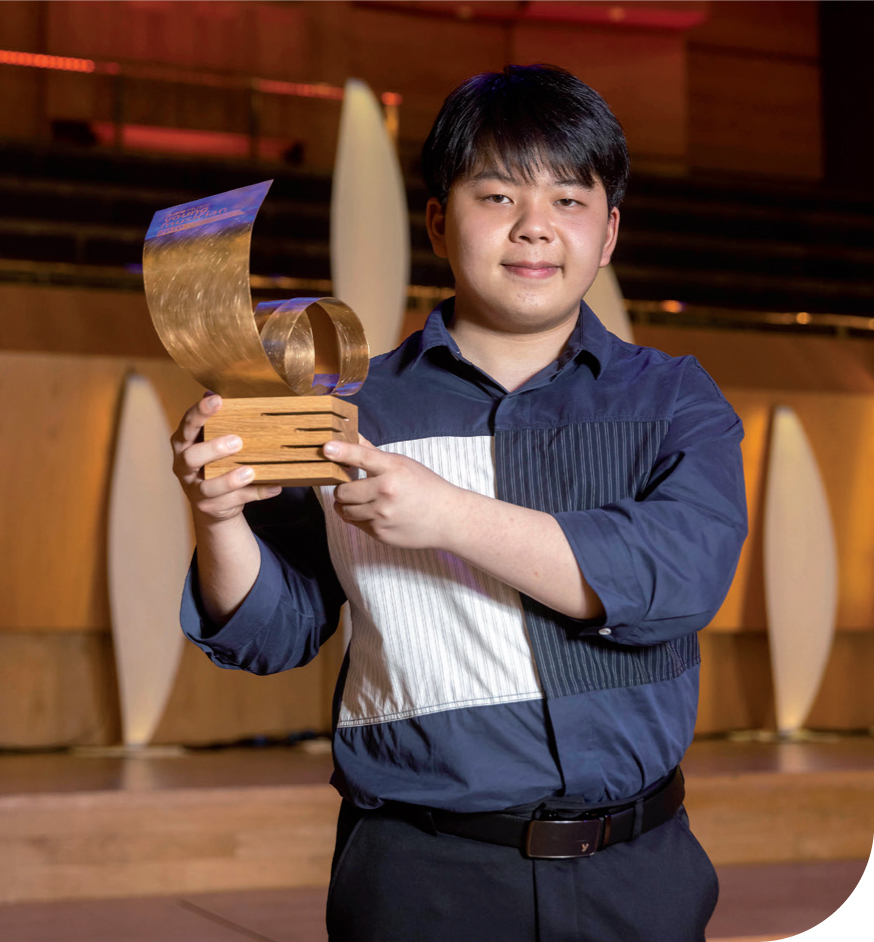 Fang Zhang with his award

Zhang trained at Qingdao Percussion College in China, where he was scouted by Le Yu, deputy director of percussion at the Royal Northern College of Music, and was asked to study in Manchester. Yu has been a huge influence on Zhang, he says, being the person who encouraged him to enter the BBC Young Musician competition.

As a member of the China Youth Percussion Orchestra, Fang Zhang has been performing around the world since he was 11 years old. Despite only being 17, he has won international percussion competitions in Japan, the USA, China and now the UK. He makes clear that his first percussion teacher and president of the Shanghai National Percussion Association, Chen ShaoLun, made a massive impact on the course of his life. Zhang says: ‘Chen ShaoLun not only taught me skills in playing percussion, but also taught me how to be a good person and deal with things in my life. He shaped my personality and taught me not to give up.’

As a final remark, Zhang leaves me with some sound advice: ‘The most important quality in a musician is to treat every performance very seriously and prepare well for it. Young musicians need to ask themselves serious questions, such as “Why are you learning music?” and “what influence do you want to make on the field of music?” when they start practising.’

A year of improvement

The competition's grand final was postponed due to the pandemic, leaving performers with an extra year to perfect their pieces. The semi-final was recorded pre-Covid in March 2020 but wasn't broadcast until the end of April this year. Oboist and finalist Ewan Millar believes the time in between improved his performance of Legacy by Oscar Navarro dramatically. 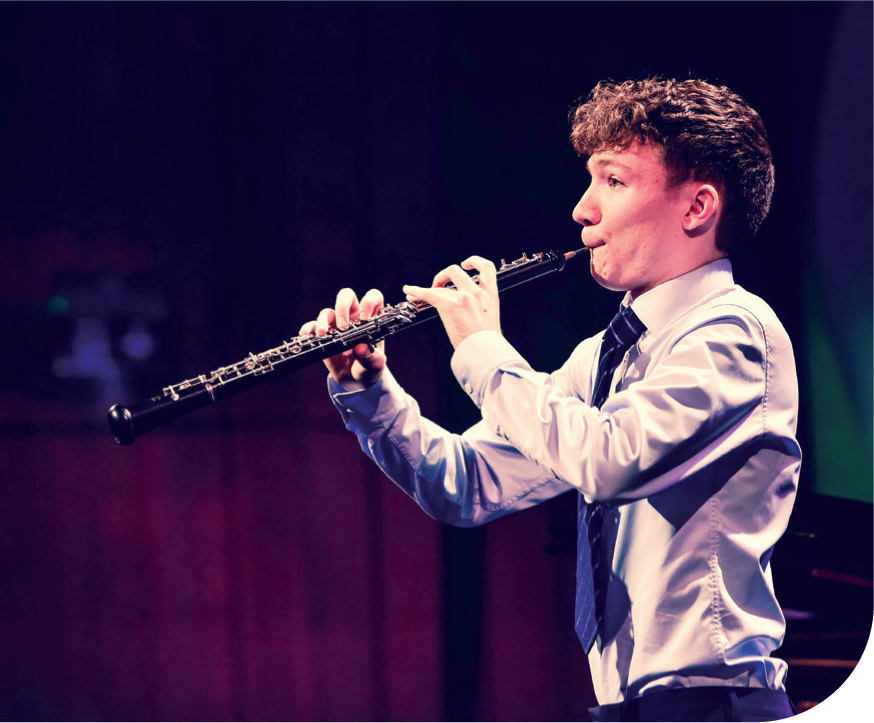 ‘I truly think it made my performance better,’ says Millar. ‘That was made quite obvious to me when watching the semi-final back – I was happy with how I played but I also noticed a whole myriad of differences. Having a whole year, it meant that by the end you had really lived and breathed the performance. It meant that within the boundaries of this work that you knew so well, you also had this freedom of interpretation – spontaneous freedom – simply because of how well you knew all the ins-and-outs.’

Winner of the woodwind category, 19-year-old Millar from Reading is now in his second year reading music at Oxford University. Revealing the secret to his success as an oboist, Millar explains: ‘It's not about doing huge amounts in one go or doing it perfectly when you play. Doing little bits every day will be so much more productive than feeling any pressure.’

Each finalist performed with the BBC Philharmonic Orchestra led by conductor Mark Wigglesworth – a unique experience for any young musician. ‘I had never played with an orchestra of that calibre before, and they are just so immediately receptive to everything you do.’ Millar explains. ‘They are incredibly malleable players. So much of British music making is being able to show up on the day and immediately pull out a perfect performance with very little rehearsal.’

‘It was slightly overwhelming,’ Millar admits. ‘At the first rehearsal I had not played with an orchestra that could make that much sound before. I thought it would be more of a wall of sound, but they balanced with me perfectly.’

The third finalist was 18-year-old Annemarie Federle. She won the brass final on the French horn and is currently in her first year studying at the Royal Academy of Music in London. Her performance of the Horn Concerto by Ruth Glipps in the grand final was highly commended by the judges. ‘I always get nervous for everything, so I was expecting to be nervous,’ she laughs. ‘But I think it is easier to play with an orchestra than it is just with a piano because you feel very supported. I ended up really enjoying it.’ 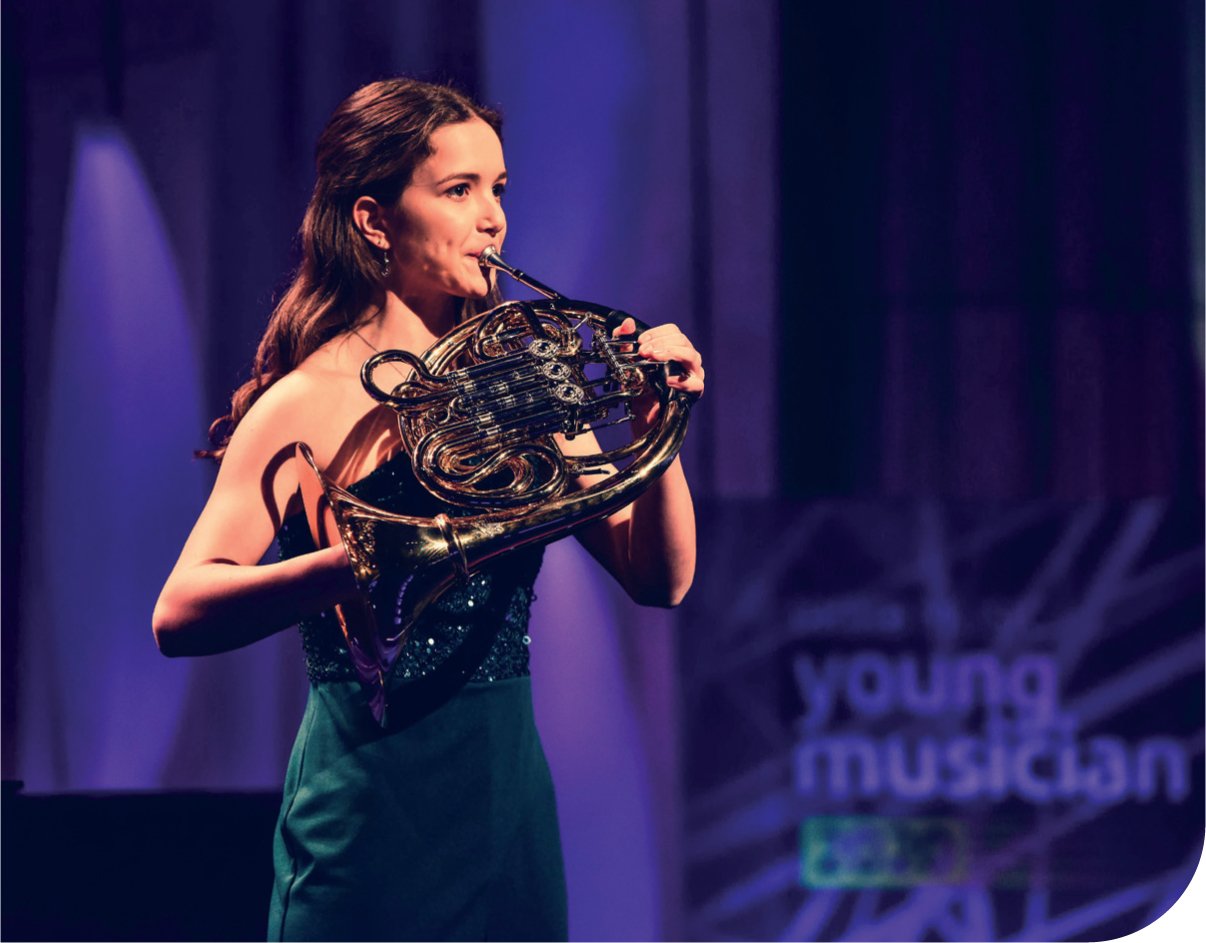 When asked about their inspirations, Millar and Federle both mention musicians that they had been able to meet thanks to the competition. Federle explains: ‘One of my teachers, David Pyatt, was the first and only horn winner of the competition and he's obviously been a massive inspiration for me. He is also at this point the only person who has recorded the piece that I have played. I would also say a massive inspiration are my peers. I think you can learn so much from who you surround yourself with.’

Millar adds: ‘One of my biggest inspirations was actually there at the grand final – Nicholas Daniel. He is someone who every oboist knows and is just phenomenal. He has used his platform and career to commission huge numbers of works, which has meant he has defined the modern oboe world and the oboe repertoire.’

Despite the youth of the finalists, they all have a grasp of the music industry and what it takes to become a professional. Federle believes that ambition is the key to success as a musician, saying, ‘You have to be very ambitious, and you have to have high expectations of yourself because it is such a competitive industry. You have to get on with people as well, but definitely have high ambitions’. She also adds that, for young musicians, ‘It's just about gathering as much experience as you can. For me, it was about starting in tiny orchestras and youth ensembles and gradually building it up.’

Millar has a different opinion: ‘I think the most important quality in a musician is perspective. Especially if you're a soloist, it can be a really isolating task – it is flawed because musicians are constantly shaped by those around them.

Which musicians are successful can seem capricious when there are so many talented people out there. So, I think it is far more useful to value all the musicians around you and what they each bring to the communal music making experience than it is to be solipsistically obsessed with your own self-improvement and success.’

Both Millar and Federle are aware of the element of elitism in classical music and are advocates for breaking this down. Their youthful viewpoint on schooling and the country's approach to early music education is an interesting one. ‘Obviously schools are limited by budgets and access to teachers, but I think one way to awaken a passion for music making in children is to encourage more collaborative ensembles and group performances,’ Millar says.

‘That way it doesn't feel like a forced discipline that your parents or teachers are making you do, at least at first. The community and ensemble feel should be present from the beginning. I think that's what makes music making enjoyable. Also, I think in some cases it is crucial to give students the opportunity and freedom to develop their own internal drive to become better at their instrument. I feel like that can be inculcated if students feel like they have a sense of control and agency over their repertoire.’

Federle adds: ‘For me, it was very natural to pick up an instrument because my parents both do music as a hobby. If we can create that kind of environment in schools, where instruments aren't just for the few or the elite, and it is just something that everyone naturally does, I think that would change a lot of the preconceptions of the classical music industry.

‘So much of music isn't being on your own practising, it is about collaborating and performing together. That is what made me want to do music as a career – working with other people who have the same interests. That element of music is really important.’

Looking to the future

BBC Young Musician has given the next generation a platform to celebrate their passions, but also to question the existing methods in classical music education. Not only are these finalists bringing lesser-used instruments to the forefront of the classical music world, but they are also questioning how we can be more inclusive in our teaching.

The youthful perspectives that Zhang, Federle and Millar hold shine an optimistic light to the future of the industry and reinforces the ever-changing perception of the nature of classical music within wider society. The fruits of BBC Young Musician do not stop after the final, as inspiration to other young musicians will continue to grow long after the ceremony has passed. No doubt each of these musicians will continue to have illustrious musical careers and will go on to further inspire hopeful students and teachers across the nation. BBC Young Musician 2020 finals to be broadcast a year on