There is a gaping hole in orchestral music. Harriet Clifford speaks to two musicians from the National Youth Orchestra of Great Britain (NYO) about how they are working towards filling it, and how teachers can too.

‘It's difficult for the teachers, because what are you going to do at A Level? If the only way you can pass the exam is to study all these dead white guys, then that's kind of what you have to do.’ This is 17-year-old hornist Alice Knight from West Berkshire, speaking to me over Zoom. She has been a member of NYO since 2019 and performed in the orchestra's Mighty River concert at the Royal Festival Hall, a showcase of Black composers that was recorded by BBC Radio 3 at the end of October.

Circling back round to my original question, she says, ‘No, I've not had any experience of playing anything by Black composers at school, at all, ever.’ We sit looking at each others’ disembodied heads for a few moments – myself, Knight, and 16-year-old NYO violinist Towa Matsuda from London – the stunned silence only punctuated by a few snorts of nervous laughter. As three people under the age of 26, we've grown up online and on social media, exposed to lives and opinions that are different from ours every day, which often leads us to feel that diversity is the norm. Knight's statement, added to the fact that there is not a single composer who isn't a white man on her A Level syllabus, seems utterly absurd.

This lack of representation on exam syllabuses is nothing new, of course, and in 2015, 17-year-old Jessy McCabe successfully campaigned to include female composers in Edexcel A Level Music. Similar calls have been raised elsewhere in the arts, and in October this year, Penguin Books launched a campaign called Lit in Colour to diversify GCSE English literature reading lists, following a report which found that 56 out of the 65 novels and plays on the specifications across three main exam boards are written by white authors. But these positive shifts aren't universal, with graded music and 16–18 assessment exam boards frequently coming under fire for their limited representation of composers who hail from beyond Western Europe.

The ripple effects of this are inevitably far-reaching, which Knight sums up when she says, ‘I think among young people there's a bit of an assumption that classical music is for old, rich, white people, so I think there's quite a negative perception of it generally.’ Matsuda, who is Japanese, adds, ‘It's interesting, because there are obviously classical composers from East Asia, or from anywhere across the globe, but I've made the assumption that classical music is essentially white people's music. Of course, that is not the case.’

He adds, ‘Unfortunately in my school, Black composers aren't really recognised. I think in terms of Black Lives Matter, it's more focused on academic work. There are talks, like history or philosophy society talks, but barely any in music. But Black Lives Matter is something which is universal – it takes place anywhere and is important in every aspect of our lives.’

Free from exam or curriculum constraints, the musicians in NYO took matters into their own young hands. One part of this was the Mighty River concert, in which the orchestra joined musician and activist Jermain Jackman to showcase some of the music explored in their latest digital residency. The residency centred around repertoire by Black composers and learning more about their lives and racial justice initiatives.

Knight explains that they were set challenges as part of the summer residency, which included playing a piece by a Black composer, shining a light on a Black composer, creating an improvisation in response to a story or piece of music or art by a Black artist, and collaborating with others to create a whole piece. NYO bassist Brooke chose the second task and, after some Googling, discovered Boston-based young, Black, female composer Mason Bynes. The pair had a Zoom call, created a video that is available to watch online, and Brooke then performed Mason's piece Hades at the NYO Mighty River concert. 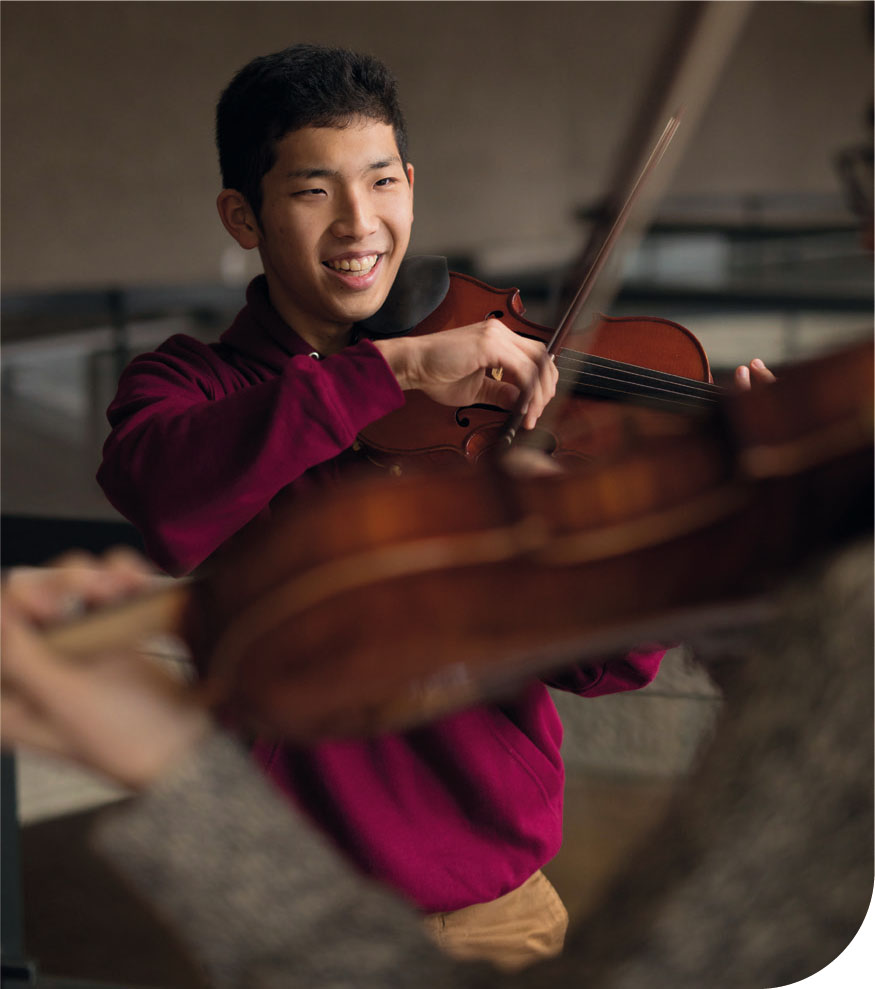 Matsuda tells me that he played as part of a string ensemble composed of six violins, one viola, and one cello in the concert. They accompanied Amazing Grace, as sung by Jermain Jackman and Deep River by Harry Burleigh. ‘This was spiritual music based on the struggles and difficulties which Black people have had to go through.’ At the heart of the concert was a full orchestra (reduced from 164 to 54), a performance of Mighty River by Errollyn Wallen, as well as performances of Starburst by Jessie Montgomery, Adolphus Hailstork's Flute Set, and the second movement of Florence Price's String Quartet in G major.

The NYO's mission to diversify classical music does not stop at repertoire, however, and the NYO Inspire programme is for young musicians playing at Grade 6 level or above who are underrepresented in orchestral music. This includes people who are Black, Asian, or ethnically diverse, and students who attend state schools.

Knight explains, ‘We do residencies in February, which are the structure of an NYO course, so we have sectional rehearsals and it's meant to be the “NYO experience”. We also do individual days, and there's NYO Inspire Orchestra, a week-long residency which usually runs in the summer.’ For her, the most amazing experience was being part of Play the School, in which she went with NYO to two state schools in Nottingham and helped run creative workshops with the students. In 2021, NYO's Inspire programme will look a little different, with a mixture of digital and in-person events and residencies, but it has been expanded to welcome as many young musicians as possible, with applications open until 30 November.

Clearly, exam syllabuses are not going to change overnight. But lower down the school, where teachers are not constrained by rigid GSCE or A Level specifications, there's more room for a music department to take ownership. Matsuda reflects, ‘I remember in my Year 7, 8 and 9 music lessons we used to listen to different composers – like Haydn, Mozart, Bach – then write little melodies from their music. But obviously there are so many composers, even from the classical period, such as Chevalier de Saint-Georges. Rather than just focusing on the same famous composers, any school should include these composers as well, because really they are forgotten.’

Thankfully, some progress has been made. For example, the BBC Ten Pieces Trailblazers digital programme challenges children aged 7 to 14 to rethink orchestral music by introducing them to influential composers from around the world, including Florence Price, Ravi Shankar, and Heitor Villa-Lobos. This incredibly successful initiative for schools is certainly an important step in the right direction, but hopefully one day it won't be a case of having to ‘rethink’ orchestral music at all. Knight says, ‘For me, it's like “Oh, a woman wrote this piece, that's so exciting,” or, “Oh, a Black person wrote this piece, how cool.” But we could change it so it's like, “Well obviously classical music is diverse. Obviously it is.” That would just make more sense.’

On the Changing Tracks website for music services, there is an insightful video in which Hertfordshire Music tutor Ije Amaechi discusses the importance of diversity, inclusion, and representation within music education generally. In the video, she says, ‘From early years in school, you're indirectly told that you're not important, and your history is not as important as that of your white peers.’

She goes on: ‘Like diversity, representation is not just important, but vital to being comfortable with your identity and your sense of self in society. It gives you a deeper sense of belonging and plays a big role while growing up, teaching you that you're not alone and that there are people who look like you who have achieved what you can achieve. As a music tutor, I've been into schools with my afro hair out and had other Black or mixed-race children be excited and happy that someone has similar hair to them and is teaching them music.’ With these words, Amaechi highlights how deeply rooted these issues are in young people's lives.

The young musicians in NYO used lockdown, with all its challenges and anxieties, to contribute towards positive societal change. Although the arts may emerge from this pandemic battered and bruised, let's ensure that our recovery curriculum is reflective of the wide array of talent that makes up this resilient, brilliant sector.