Sarah, 2020 has been tough, how has the banding community fared?

2020 has been really tough for the banding community in general. The vast majority of the people who take part in banding are amateurs, who aren't paid for the work they do. Not only has that meant that they have had a lot of strains and stresses in their working and personal lives, on top of that they've had to think about what their band situation is looking like, and how they're going to deal with the pandemic situation in their off time as well.

Because most members of the banding community are amateurs, they come under slightly different restrictions to professionals, and it took quite a long time to get to a situation where we could hold rehearsals again. Obviously [as this article goes to press] it isn't happing once again. It's been a long journey. Some organisations were able to get back together again quicker than others – those that had large, appropriate spaces to work in, for example, where they had ventilation and spacing. But lots of people who have small band rooms, or who rent from schools, have found it much harder. Some people did manage to get up and running fairly quickly when those restrictions lifted. Some people haven't managed to have a rehearsal yet, or had just got their first rehearsal in before we went into lockdown again.

How have you been supporting your members?

In terms of Covid directly, we poured a lot of energy into producing resources, creating links with DCMS and Public Health England to make sure that they understand the type of activity that brass banders take part in, and to make sure that our members fully understand how the restrictions apply to them. Those kind of strong links have really helped.

We've also been really busy doing lots of online development webinars. We had planned a series of events, touring around the country looking at artistic development and player development. Then it became clear that that wasn't going to be possible any time soon – the week of that first lockdown in March, we had just launched our first webinar. We acted pretty quickly and planned a big range of topics, covering conducting, composing, and governance. We're doing a session on diversity this week. It has been really varied; we have kept it up and we will keep on doing them for quite some time. 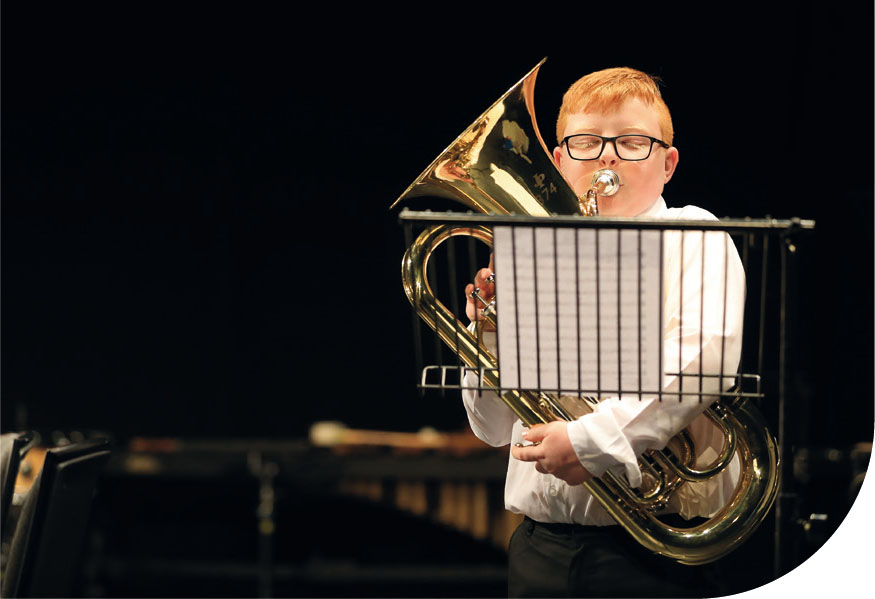 What can the brass banding community offer to teachers?

There are lots of exciting things happening, and lots of exciting things that Brass Bands England are involved in. Something that teachers may or may not know is that competition is at the heart of a lot of the brass banding activity that goes on, which is quite unusual compared to other artforms. But it really is an amazing thing, because it keeps quality very, very high as a general rule, in a way that other amateur organisations don't necessarily have. They are constantly improving, constantly striving to be better, but also constantly looking at new music. Brass banding is actually really forward-thinking. It is constantly commissioning people to write and constantly looking at new music. In every contest you will find something that hasn't been composed too long ago, another thing that can be unusual in amateur music making.

Is the old image of the local brass band taking all-comers still a thing?

Yes! Something else that is unusual and really fascinating about brass banding is that they will literally take anyone. As a general rule the community spirit is quite incredible. I know of people who have started playing in their fifties, because they've always fancied playing a brass instrument, and a week later they've been handed a cornet and been told, ‘Let's get you involved, then.’ That definitely does happen.

There are lots of banding organisations that will have a youth band, a beginners’ band, a general community band, and then a competitive band all within the same organisation, so there's a band for everyone. Lots of our youth organisations are dedicated to making sure that there is youth access.

What do you have coming up?

One of the projects that we are just about to launch, thanks to the Arts Council England Cultural Recovery Fund, is a project to employ five peripatetic brass teachers to work with youth bands in their area to provide tuition and also to help to engage more young people in banding who maybe wouldn't have thought about it before. We want a spread of teachers across the country; we will go with people who are enthused and really excited about the prospect. A big part of it is going to be making sure that the music education hubs and the bands are speaking to each other and are becoming part of the same community. The National Youth Brass Band Championships, which Brass Bands England runs, had to be postponed this year. What are your plans for the event?

It is such an amazing and enjoyable event for everyone involved. The National Youth Brass Band Championships was cancelled this March, due to the pandemic, but it will continue in future years. A couple of years ago we rebranded the event, and it really has gone from strength to strength. One change we made that has had a really big impact has been the introduction of a debut section – a non-competitive section of the event that is just there for kids to have fun and to give them their first opportunity to play on a stage. We had [TV presenter] Dave Benson Phillips involved, who was the compere for the day. The whole event is about being high energy and fun and it has been a really great experience.

Because we opened things up with the debut section, lots of ensembles attended that we wouldn't usually see at this kind of event. In 2019 we had a brilliant turnout, including a group from Houndslow and The Brass of the Staff, a youth brass band from the centre of Leicester. The diversity and range of the kids that we saw taking part was massive. There were some kids there that literally started playing in the January and came to perform that March. We don't limit the debut section to just brass band instruments. If you've got French horn players, or even plastic instruments, we welcome those as well.

To check for updates on the National Youth Brass Band Championships and to read the full list of resources, webinars and the many other membership benefits of Brass Bands England, visit www.bbe.org.uk